ELNA’s got tanks, tshirts, hoodies, stickers AND coozies for sale.  Tshirt sizes range from 2xl to small, ladies cuts and unisex, in colors white, black, grey, heathered blue, and a few random others.

We’ve got youth sizes and baby onesies too! 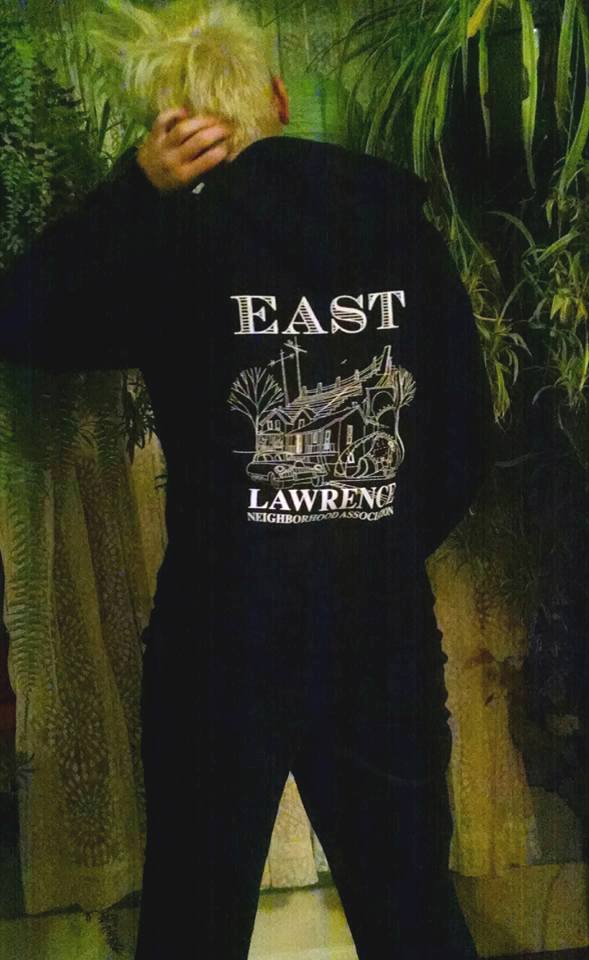 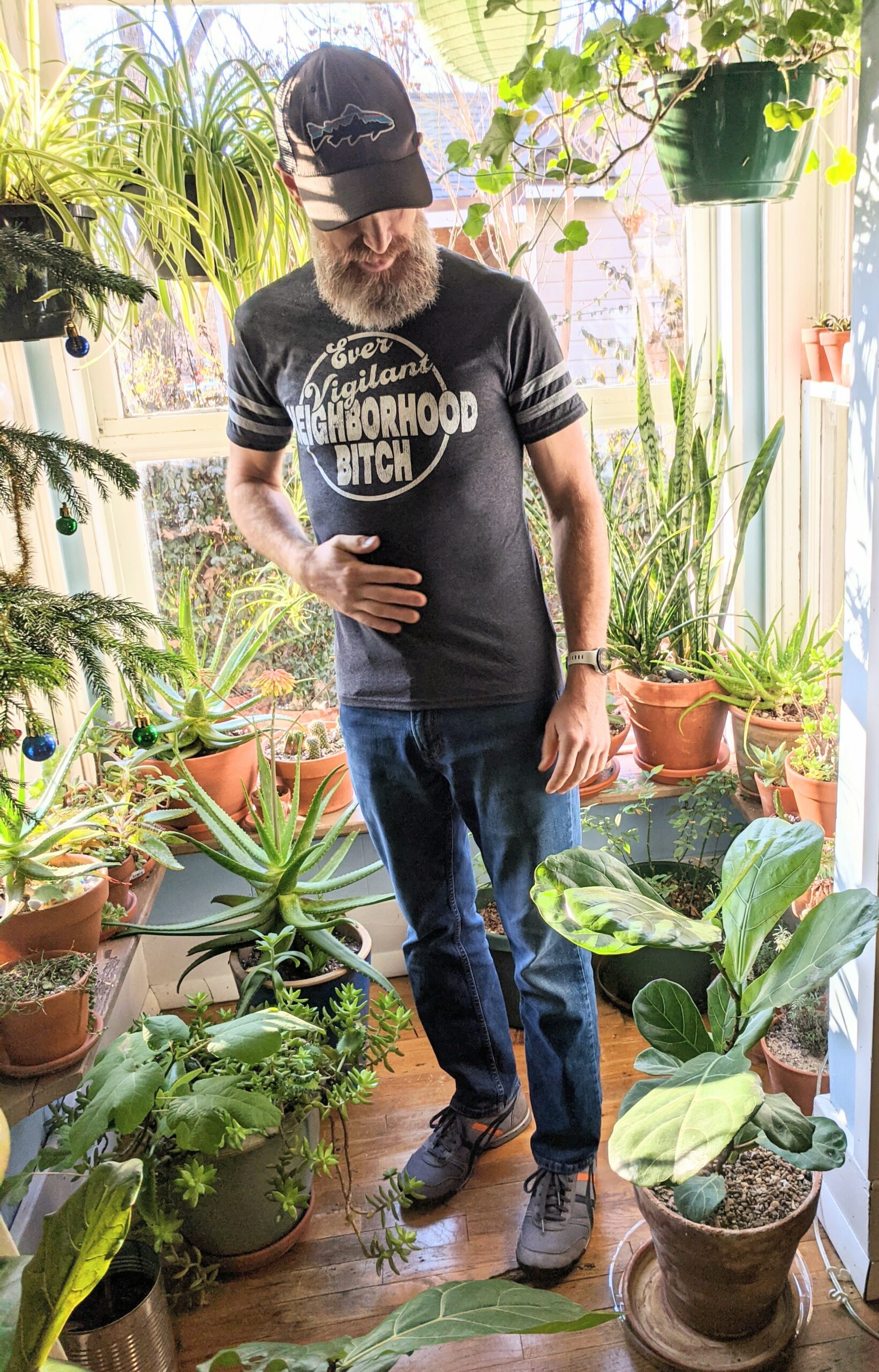 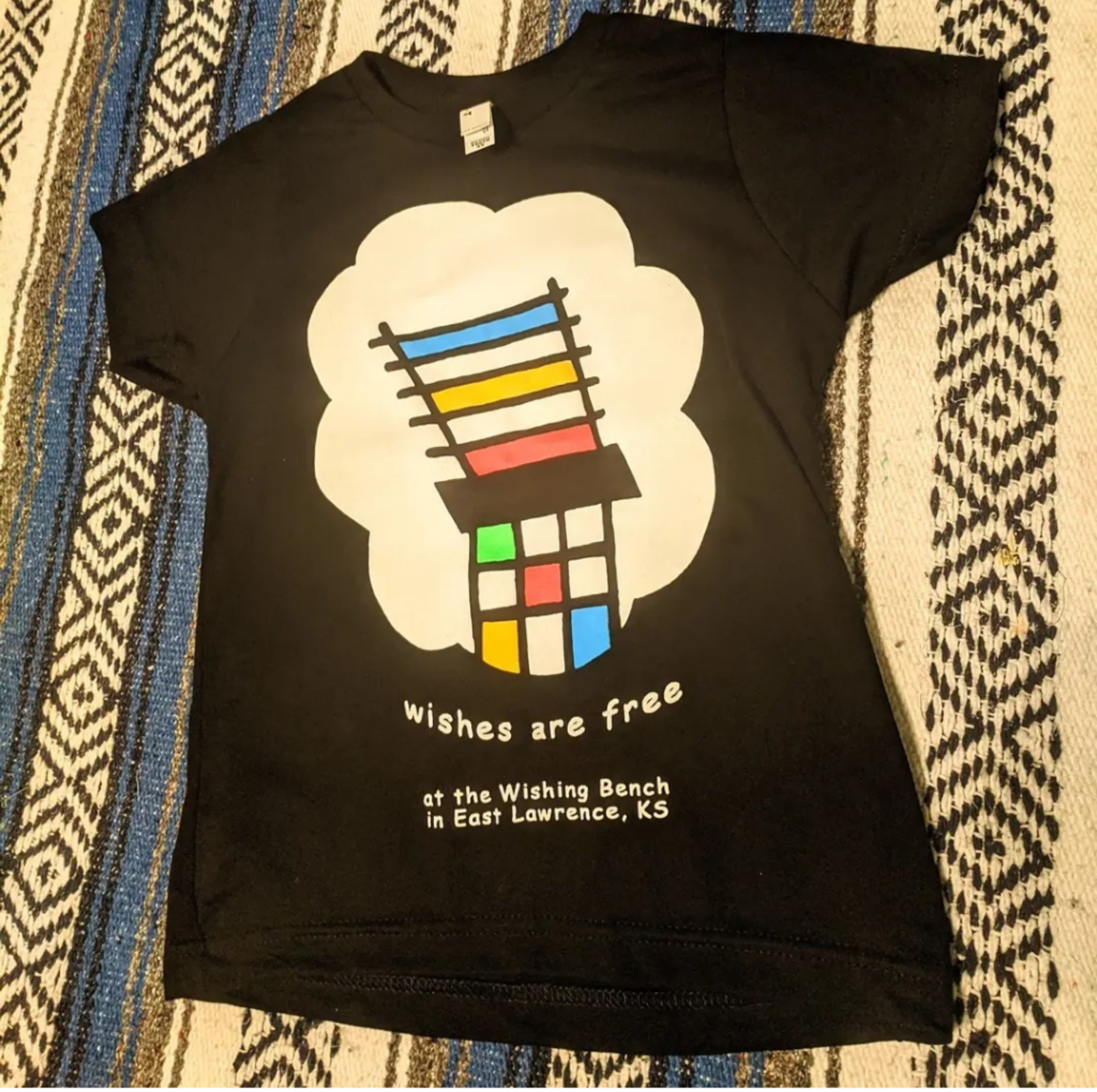 This last fall (2020), we printed a new run of merchandise featuring the image of a possum, hanging upside down, with a wrench in one paw. (Do you call it a paw?  Is it a hand?) You may have seen this image in other locations around town, such as the back parking lot of Cottin’s Hardware.  The original possum art is the work of ELNA Board member and local artist Dave Loewenstein, and has been reproduced with his permission.  We have Pride of Gumbo printing, at LFK Press on E8th St, to thank for printing the tees!

Here’s what we know about the possum lady:

Our Lady Possum, is definitely a lady, for reasons unexplained.  She’s handy and unafraid of work, as evidenced by the wrench she carries. Got a clog?  Possum Lady can probably fix it. Because she is an East Lawrence resident, we can presume that Our Lady Possum is in fact an Opossum, the only New World marsupial, and a distinct animal from the Australian Possum, which is more closely related to a kangaroo.  But the “O” is silent ‘round these parts.  A rare and beautiful, mostly nocturnal creature who eats ticks and can’t get rabies, she can be fiercely protective of her territory and her young.  Like a true East Lawrencian, she’s also a bit of a scavenger.  Never one to judge, Possum Lady says “in east Lawrence, you’re okay.”

The Story Behind This T-shirt

Shelley Miller (1954-1994) was a beloved East Lawrence friend and neighbor.  When Shelley served as East Lawrence’s neighborhood association President, she took on the issue of truck traffic in the neighborhood.  Tractor-trailers frequently traversed streets that were not designated truck routes, including Shelley’s.  After repeated unsuccessful calls to the City to enforce its traffic ordinances, Shelley was known to run from her yard into the middle of the street to stop trucks, and explain to the drivers that they were not on a designated truck route.  Shelley went to a City Commission meeting to address the issue, and told the Commission that it should not have to be her job to run into the street and be the “ever-vigilant neighborhood bitch.”  The Journal-World published the quote in the newspaper.  Shelley embraced it, and designed “ever-vigilant neighborhood bitch” t-shirts that many neighbors proudly wore.  Thirty years later, with traffic safety still an issue in East Lawrence, ELNA has resurrected the t-shirts with an updated design.  Wear yours proudly! – Barry

Help us keep things running! Pay dues easily and securely via PayPal. Click the 'Donate' button above to get started.

join the conversation
By: Medical Jobs